Politics is often referred to as "The Highest of Human Sciences."  Before reading any further, it must be noted that campaigning and electioneering, which are different than the practice of politics, does not and should not exist in Rotary.

To simply explain why politics resulted in the increase of the number of Rotarians, a quick review of the state of Rotary International (RI) in 2010 when the world economy was in the doldrums is in order.  RI membership had been stagnant for over a decade and was dropping in some major market regions; it was on the verge of having to dip into its financial reserves; its sole priority was polio eradication; it considered itself a service organization that wanted members; and The Rotary Foundation was finalizing its Future Vision.  Membership development was so far down RI's priority list many never even read the words.

A few visionary senior leaders decided that membership development's priority needed to change.  They developed a plan to improve membership to 1.3 million by June 30, 2015.  The plan estimated that it would require $3,000,000 to support the initiative.  Developing the plan was quite an undertaking.  Getting the plan approved by the RI Board of Directors was another matter.  Finally, after extensive discussion and negotiation - politics - the Board approved the plan.
In retrospect, was the plan successful?  Yes and No.  Yes - Membership development came to the forefront in many Rotarians' and senior leaders' minds and has climbed to be RI's highest "internal" priority.  No - the plan did not reach the 1.3 million goal.  Would the Board have approved the plan had its goal not been 1.3 million?  Maybe; Maybe not.  Was the $3,000,000 a good investment?  Yes - for at least four major reasons:
Retention Central has often been, and may continue to be, critical about senior leaders' attitudes, approaches, priority, and non-verbal communications regarding membership development.  But its Rotatorials may have been influential in causing them and other Rotarians to exercise critical thinking about membership development's importance and priority.

The history of faltering organizations that made changes and survived teaches two important lessons, which Retention Central understands with heart and brain: -1- It usually takes harsh, drastic action to initiate change, and -2- political skills - politics - are needed to lead change until and after it is embedded in the organization's culture.

Is it because Rotary doesn't know the value of its public image?  Or perhaps Rotary isn't interested in re-learning the principle upon which it was founded and how to market it. 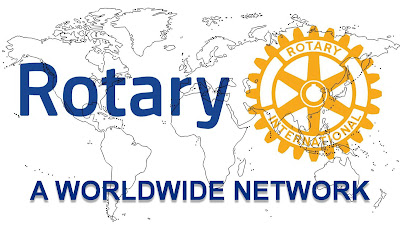 Seriously, contemplate about Rotary's founding principle as you visualize Paul Harris setting up a law practice in Chicago, a boom town loaded with other men doing the same.  He knew the value of networking long before New York Times columnist David Brooks said, "We all think we choose what path we take in life, who we socialize and mix with, what views we hold.  But those decisions are actually shaped by networks of people."  From this basic concept, Rotary was born and grew to be the international organization it is today - a network of Rotarians, shaped by the Object of Rotary, who have made, and continue to make, their families, businesses, communities, and the world better; by-products of the influence Rotary's worldwide network of business, professional, and communities leaders has had on them.
What seems to be lacking in marketing the network's collective value is a worldwide acceptable public image position statement.  For example, the Rotary Club of Sarasota created this statement:

Subtle, but it can deliver a public image wallop!  (Remember, a club's prime public is its members; its secondary public is the few that may be interested in joining a local Rotary club.)  All the club had to do was center on answering "Why does the Rotary Club of make better?"  To see how the club puts this thought process to use in its internal and external public image efforts, browse these web sites - Rotary Club of Sarasota and its charitable arm, Rotary Club of Sarasota Foundation.  (Oh, yes.  The most important details - the club has 96 members, and this past year it had a 98% retention rate, sponsored a new club, and last week added two new members.)
In this BLOG's Marketing Rotary for Non-Professionals series, this Rotatorialist suggested that Rotary International should develop a position statement that would be acceptable worldwide similar to Rotary Makes the World Better - One Community at the Time.  Building public image initiatives around a similar positioning statement could work in virtually any social fabric.  Its most important asset is this: it would encourage the Rotary network, particularly its leaders, to critically examine why Rotary makes the world better - one community at the time.

Most likely the network would come to understand that its public image value lies in its social capital - Who Rotarians are.  Then it would be easier to respond to "Why Rotary?" and to create more Rotarians.
Posted by Jim Henry at 8:30:00 PM No comments: