WITHOUT CONTINUITY IN LEADERSHIP, ROTARY'S GOALS CAN RUN AMOK! 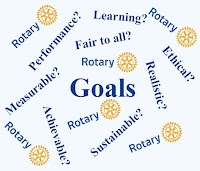 Goals focus attention and deliver results, which is exactly why nobody likes to talk about goals that run amok!  But they do, more often that we realize!  Rotary International (RI) leaders, because of Rotary's leadership cycles, frequently set well-meaning time-sensitive performance goals.  Unfortunately, such goals can have long-term damaging effects, but few Rotary leaders care to discuss potential future effects because their thoughts are now, what they consider 'my time'.
For example, let's return to Rotary year 2001-02.  RI's growth had stagnated for several years and declined in several major market areas.  RI leaders approved a well-meaning performance goal to increase membership 10% by a deadline nine months into the year, which allowed the RI President to present awards to his team 'during their time' at the annual International Convention.  RI assumed that a large percentage of the recruits would remain in clubs, therefore returning RI to a steady state of growth.  This was a logical assumption, and the goal delivered the expected short-term result.  Because of its success, ensuing Rotary leaders continued setting short-term, performance recruiting goals, sometimes focusing on specific generations and genders, yet RI membership continued to stagnate. The 2001-02 initiative did not deliver the long-term result it desired.  Instead, it delivered the perception that RI and its member clubs were desperate for members and would induct anyone that had a heartbeat and could afford six months dues.  One club, at the last meeting before the nine-month deadline, hurriedly inducted several recruits so it could receive an award.  The club president (my time) got the award, but not one recruit ever attended another meeting, leaving them and existing Rotarians with lasting, negative perceptions.
In 2011-12, RI directors wisely approved a complex learning goal to achieve an 80% average retention rate over a three-year period.  The initial shock was that Rotary leaders had to learn the importance of continuity in leadership and messaging, minimizing traditional 'my time' thought processes.  Rotary and staff leaders had to learn the significance of retention rates.  Staff had to learn and develop algorithms to convert data into easy-to-compare, understand, and communicate metrics.  Coordinators, district leaders, and clubs had to learn the deliverables necessary to retain members for three or more years.  Probably because of this complexity, the 80% three-year goal was a well-kept secret until 2014 when RIPE encouraged clubs to improve their annual retention rate by one percentage point, reinforced by RIPE Germ eliminating the use of nine-month 'my time' deadlines.  But even focusing primarily on retention goals can deliver devastating long-term results.  Without continually developing new acquaintances (recognize the wording?) Rotary could literally die off.

Setting appropriate goals should be considered a cooperative undertaking by past, present, and future leaders.  Analyses of past goals, including those that had run amok, and the short- and long-term affects they had on the Object of Rotary should be carefully weighed.  Goals should also recognize that RI was organized and districts were created to charter and strengthen clubs.  Every club's purpose is to attract and retain members.  Both are necessary to continually advance the Object of Rotary.  This is why the only easy-to-understand and communicate metric that is fair to all concerned and reflects Rotary's long-term viability and effectiveness is an RetentionGrowth Index.
Posted by Jim Henry at 10:25:00 AM