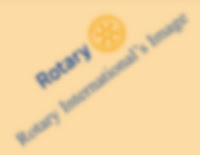 The image (reputation) of Rotary International (RI) is a fundamental instrument in influencing how Rotarians and non-Rotarians view Rotary. RI's image is a valuable component of its differentiating identity. The image cannot be blurry because it is defined by those who view Rotary from outside of the association.  Rotary's image:
·  attracts groups of people who may be interested in becoming association members,
· stimulates the attention of people who may become members of local clubs,
·     influences RI's image in competitive markets and cooperative endeavors,
·     attracts people to become club, district, zone, and international leaders,
·     arouses the interest of people who may wish to be employees of RI,
·     helps retain employees and member clubs, and/or
·     helps member clubs attract and retain members.

All of these issues are important.   But the single, most critical function that affects RI's image is reflected in how it performs in its core business; chartering and supporting Rotary clubs as they develop Rotarians.

Confused?  Join the crowd. After doing much research, it appears that successful organizations, those said to have strong and healthy corporate cultures, have three commonalities: (not necessarily in priority)
·       a corporate purpose,
·       consistency in leadership's pursuit of the corporate purpose, and
·       a differentiating identity.
These commonalities might make someone believe that identifying and addressing RI's culture would be simple.  It doesn't, but, let's get serious: Who really cares about trying to define a corporate culture as long as each of its components thrives?  If each component thrives, then the whole thrives. And all components should thrive if they pursue a common corporate purpose, deliver its differentiating identity, and sustain a continuum in leadership that understands and promotes these commonalities.  And this clearly points out why, with its multitude of components, cultures, and sub-cultures, the only true measure of success that is fair to all concerned and supports RI's purpose and objective is the ability of each club, district, and zone to develop Rotarians - regardless of their gender, generation, or ethnicity.  Success in developing Rotarians will breed strong, healthy cultures throughout.  Any measures or goals that any Rotary leader anywhere in the network communicates verbally or non-verbally that is even close to appearing equal in priority to developing Rotarians will be a diversion that could have long-term, negative affects.

We should hope that RI's strategic plan will address the importance of consistently acknowledging and recognizing successes in retaining and attracting People of Action.  To do so, the strategic plan should be clear on RI's purpose and objective, the means of delivering its corporate identity, and fostering leadership consistency through communication, education, and training.  This would make it much easier for RI to project unifying images, which will be addressed in Part IV of this strategic planning series.

An organization's identity drives its performance; it's the organization's DNA; its fingerprint, and is supported by its central and enduring attributes. Acknowledging that Rotarians are People of Action can be a major development.  Will it be?

In January, 2012 Siegel+Gale reported to the Rotary International (RI) Board of Directors that it had a critical identity issue.  Organizations without strong identities tend to scatter their resources instead of centering on delivering a differentiating value proposition to those who keep them in business, often until it is too late to recover.
RI's acknowledgment that Rotary clubs are populated by People of Action is a monumental breakthrough. It demonstrates that RI now recognizes the social identity of past, present, and future Rotarians.  At long last, RI can establish its identity, which will be the value it delivers to clubs and Rotarians that People of Action consider different and not likely available elsewhere.  Fully understanding this business fundamental and planning accordingly will drive RI's future.
Historically, before they joined a club, Rotarians were People of Action striving make their community better.  When they joined their Rotary club, they networked with like-minded People of Action, which enhanced their abilities and inspired many to establish RI's central and enduring attributes.  Central attributes are those that have altered Rotary's history, and RI has many.  are its worldwide service project to eliminate polio and the recognition that People of Action are not separated by gender, generation, or ethnicity.  Enduring attributes are those that are embedded in Rotary and are part of its overall history.  Two of several are The International Convention and The Rotary Foundation, both significant vehicles originated by People of Action to enhance opportunities for clubs and Rotarians.
Because of a lack of consistent identity, some regions have deviated from RI's historical track.  This regional deviation can be reversed if RI strategically plans for and delivers its differentiating value proposition.  Doing so will alter thought processes throughout the Rotary network and initiate changes in corporate services, literature, conventions, assemblies, conferences, and seminars.

No longer should  People of Action be referred to, considered, or treated as common volunteers; separated by gender, generation, and ethnicity, or asked to feed the elephant information that returns no value to member clubs populated by People of Action.  The next Rotatorial, Part III of the Strategic Plan series, will touch on why it is important to consider the culture of RI and its member clubs, which includes organizational issues such as historical and present practices, visions, values, locations, and social fabrics.

Rotary and Strategic Plans - Part I of IV Parts - The Basics

Rotary International (RI) is in the process of updating its strategic plan.  For the plan to guide RI toward a successful future, it must center on these business fundamentals:

Yes, RI's sole purpose is to charter and support Rotary clubs simply because without member clubs, RI cannot exist.  This is such a simple fact that its importance is often overlooked or forgotten.  Everything accomplished in the name of Rotary by local Rotary clubs as they advance the Object of Rotary is the recognition and reward (income) RI receives from chartering and supporting Rotary clubs.
RI's sole objective is to advance the Object of Rotary.  Many RI leaders and Rotarians believe that Object of Rotary is outdated.  Their real issue is that, with good intentions, they simply have allowed their thought processes to be diverted from the Object's timeless principles.  This is not an uncommon phenomenon in legacy organizations, particularly those with frequent changes in leadership.  If one understands the Object of Rotary, they will conclude that it was never intended to be specific; it was intended to be, and is, eternally applicable in all social fabrics.
Strategic planners and leaders must firmly embed these fundamentals in their thought processes as they examine three separate but distinctive elements of a functional strategic plan: RI's identity, culture, and image; all of which will be discussed in more detail in following Rotatorials.
As an example of the differences in these elements, RI's identity should answer the question "Who are we?" Its identity should be differentiating, central, and enduring.  Its culture encompasses values and behaviors that are unique to its social and psychological environments.  Its image (reputation) is its member clubs, Rotarians, and outsiders' opinions about RI, and is typically the result of social evaluation on set criteria dependent on time and location.  A major portion of the image criteria is how RI recognizes and supports its member clubs.

Preparing and executing an effective strategic plan is not an easy task, nor is it for amateurs. The next Rotatorial will discuss the differentiating, central, and enduring aspects of RI's identity and how identifying Rotarians as People of Action broadly supports RI's purpose and objective.