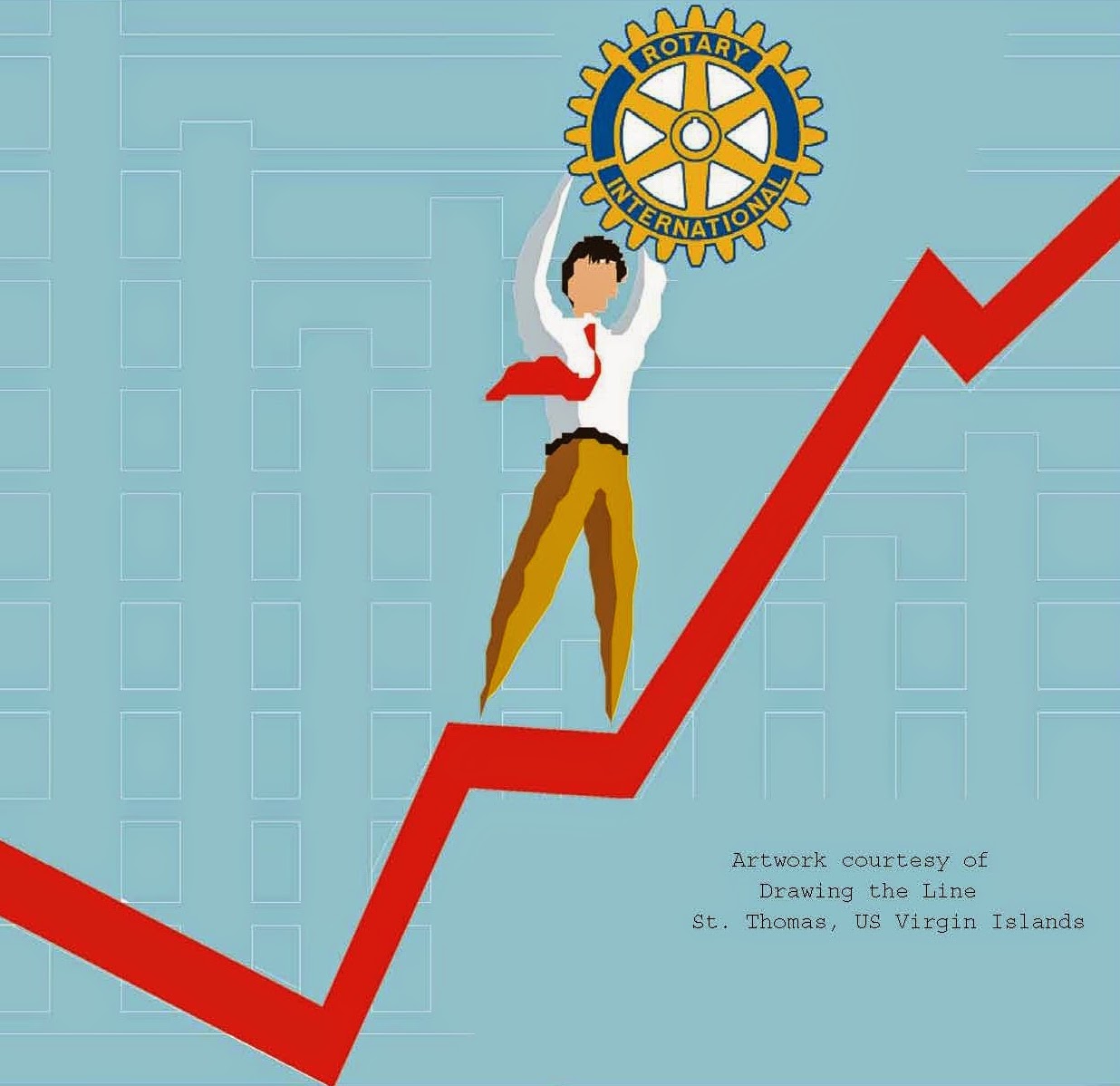 At the turn of the century, Rotary International (RI) membership had been hovering around 1.2 million for five years.  Several major market areas were experiencing a decline.  Some RI leaders dreamed of increasing membership to the 1.5 million mark.  Since then, year after year, different recruiting and net gain initiatives have proliferated.  In 2010, leaders targeted 1.3 million Rotarians by July 1, 2015.  Many dedicated Rotarians compiled and implemented regional membership plans, all approved by the RI board of directors (board) and implemented in 2012 and 2013. Today, membership is still hovering around 1.2 million.
RI's membership initiatives have not succeeded simply because they did not, in action or resource allocation, have PRIORITY. Without PRIORITY, there is not, nor will there ever be, any sense of urgency, particularly with those that are continually asked to develop membership - clubs and existing Rotarians.  If there ever was an applicable cliché it had to be, and still is, "Bad planning on your part doesn't constitute urgency on my part."  The board has, for two decades, prioritized RI programs over membership even though RI's own Code of Policies says, ". . . activities and programs addressing membership must remain the association's highest priority."  Intellectual inbreeding and complacency caused RI to forget its true purpose, the business it is in, and its internal and external target audiences.  If RI wants to survive the 21st century, it must change priorities, and this change must start with its leaders - all of them!
Change takes consistent, long-term leadership. For this change to succeed, RI must assemble an international GUIDING COALITION capable of and committed to leading the change.  Establishing such an influential group will be virtually impossible if membership development doesn't have the association's highest priority; a priority that is communicated by words and demonstrated by deeds and resource allocation.  The coalition's initial duties would be to delineate RI's purpose, the business it is in, identify its target audiences and create an attainable vision.  Without these elements, planning will be for naught, as previous membership initiatives have effectively demonstrated.
A VISION is necessary, but the vision must be considered attainable by everyone involved - including member clubs.  Had all regional membership development plans been approved in 2012, it would have taken an annual membership growth rate of about 3.6% to reach the 1.3 million vision.  This rate does not sound unreasonable until analysts (or even rank amateurs) examine historical rates. RI's prior fifteen-year annual growth rate had been teetering at 0%.  , RI's major market, was experiencing a decade long decline averaging roughly 1.3% per year.  During the last half of the previous century, RI's annual growth rate had been between 1.5 and 2%.  What actions and resources did the 1.3 million dreamers believe RI and its member clubs could or would commit in order to improve RI's overall annual growth rate from 0% to 3.6%?  To convert a major market's negative 1.3% rate to a positive 3.6% rate?  In one year!  Get real!
Until membership is considered urgent enough to receive top priority in words, deeds, and resources, any efforts dedicated to returning to a steady, long term growth rate will be wasted. Only when RI establishes membership as its top priority, a guiding coalition is in place, and critical business decisions are made can reasonable visions be established and regional plans revised.  In the meantime, all communications in words and actions must be based on the fundamental that developing its source of funding - its customers - will forever remain RI's top priority.

It is perfectly natural for leaders to gravitate to people who they like and like them; to show favor to those who agree with and work hard to support their efforts.  It's easy and satisfying for leaders to give choice, prestigious assignments to loyal followers. This encourages supporters to strive a bit harder - toward the leaders' ways of thinking.  In start-up organizations these practices often spell the difference between success and failure.
In mature organizations like Rotary International (RI) this type intellectual inbreeding is flawed ideology because it breeds institutional complacency and encourages people to continue old practices even when confronted with new challenges and information.  Intellectual inbreeding has taken its toll on RI and is still being practiced because RI leader wantabees cozy up to those who can influence prestigious assignments; rungs on the ladder to more recognition and influential positions.
The most effective way to break intellectual inbreeding is to infuse seeds of thought from outside the Rotary family, which RI did when it contracted with Siegel+Gale (SG).  Thankfully SG's findings challenged inbred mindsets and practices. There is of course the inherit resistance to change, one of many obstacles that has to be overcome.  Change must be led by a guiding coalition that wants and is prepared to lead it.  Preparation - education and training - is critical and has to begin with some wonderful, dedicated people - RI's officers and directors.  They are today's leaders and are influencing tomorrow's leaders as they were influenced by yesterday's leaders - intellectual inbreeding in its most seductive costume. This insidious form of idea depression contributed to the fall of General Motors, the Kodak bankruptcy, the meltdown of several major financial institutions, and has infected RI.   It is simply unfair to the Rotary world to expect officers and directors to govern and lead RI into the future if they are ill-prepared and do not receive the information they need to help them make informed decisions and recommendations.  Throughout Rotary, RI officers and directors influence conventions, assemblies, institutes, seminars, and conferences - training grounds for future leaders. They must be firmly grounded in fundamental objectives, responsibilities, and duties; basics they simply cannot get solely from internal sources.

In 2015, for the first time, RI directors are going to be exposed to outside training on board responsibilities. Had this been happening during the last twenty years, it is possible that RI membership would not be in the condition it is today.  Future leadership should expand on this practice by encouraging and initiating innovative ideas on creating and serving its revenue source - Rotarians.  Unfortunately, Rotary leadership has a long history of returning to the comfortable practices of yesteryear, believing that their personas alone will bring about different results - a history that must change.
Posted by Jim Henry at 4:27:00 PM No comments: Sources indicate that the average Rotarian's age has remained at 58 for the last one or two decades.  Some say this is not good for membership; that the average age should be lower.  Others disagree. This is a critical issue because it relates to the demographics and psychographics of Rotary's target audiences and where resources should be dedicated if Rotary wants to return to a steady growth state.  So let's examine Rotary history and North American demographics.
In 1905, when Paul Harris founded Rotary, he was in his 37th year.  According to the US Bureau of Statistics at that time, the average 37-year-old could expect to live another 30 years - or to age 67 (Paul Harris left Rotary and the world at 79-42 years after founding Rotary; 12 years beyond life expectancy.) Today, a 37-year-old male is expected to live 42 more years - or to age 79.  Female life expectancy is four years longer.  So what would be the expected Rotarian Lifetime Value (RLV) of a 37-year-old should they be retained in Rotary until health required them to leave? Retained Rotarians, if properly appreciated, become loyal Rotary advocates.  Word of mouth is the best advertising any organization can get.

What about non-Rotarian target audiences?  Sound business acumen must prevail when projecting Rotary's public messaging and images to any target audience.  In the , when identifying non-Rotarian target audiences, one must, among other issues, examine the work force. According to this graphic, eighty-seven percent of its employed citizens are over 26 years old.  Rotary's Messaging Guidelines suggests that Rotarians should be leaders who are defined, not by labels or titles, but by mindsets and approaches.  Developing these personal psychometrics generally takes time and experience, as does generating expendable time and resources.  So today, Rotary's prime U.S., non-Rotarian target audience most likely begins somewhere in the upper portion of the X generation, perhaps slightly older than Paul Harris when he founded Rotary.  What would be their RLV should they join and remain in Rotary until health issues determined otherwise?

Rotary's prime target audience has to be its existing members.  Resources must be dedicated to retaining and helping them become Rotary advocates.  This initiative, accompanied by consistent Rotary messaging communicating who Rotarians are, will help return Rotary membership to a steady growth state.
Posted by Jim Henry at 11:39:00 AM No comments: