"You volunteered helping some people in your community.  Good for you, but who were you helping by posting what you did on your Facebook page?"  Recent Facebook post.

Many service organizations (libraries, hospitals, museums, food banks, churches, etc.) keep track of volunteer hours.  In most cases the information is used to place a value on the volunteers' service.  This value in turn can be beneficial when it comes to applying for grants and exhibiting the volunteer-hour value to organizations' Boards of Directors and potential donors.  If properly handled, it can be used to amplify how volunteers help organizations impact communities.  For Rotary clubs, volunteer hours should be considered when determining the value of projects and activities.  But Rotary International (RI) and its member clubs can get themselves mired in the Volunteer Hour Quagmire if the information is improperly used in public information and relations.
Think about it.  The Rotary network is a member-driven organization; not a service-driven organization.  The sole purpose of RI and its member clubs is to create Rotarians who will continue to advance the Object of Rotary.  With this in clear view, care must be taken when publicizing the number of volunteer hours clubs or RI expend because it may not communicate Rotary's value proposition to its prime markets - existing and potential Rotarians.  To expend volunteer hours on service projects in not a differentiating reason to join a Rotary club.  Consider that, for decades, Rotary leaders worshiped the mantra, "When polio is eradicated, people will line up to join Rotary clubs."  Polio has been gone in all but four countries for many years, and now only remains in two countries.  But those line-ups never occurred!  Why?  Because Rotary is not what Rotary does, it is Who Rotarians Are; people of all genders, generations, and ethnicities who adopted the ideal of service in their personal, business, and community lives and utilize the Rotary network to seek outcomes that make their community and the world better.

Rotary will continue to make the world better, providing it wisely pursues its purpose and objective.  In doing so, it must strive to deliver an enhanced value proposition to clubs and Rotarians, not just in August, but all year long, forever and a day, because 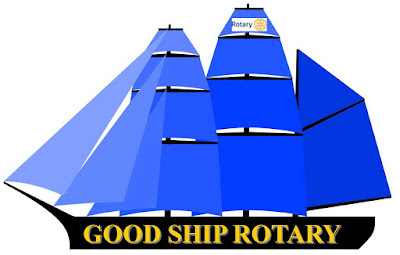 In May 2003, the Rotary International (RI) Board of Directors made Decision 324 that became RI's Code of Policies Section 26.120, "Membership Statistics:  The development and continuation of activities and programs addressing membership must remain the association's highest priority.  The association and its clubs must remain focused on all aspects of membership."  Unfortunately this decision didn't stir enough wind to get the Good Ship Rotary out of the membership doldrums where it had been stalled for over a decade.  Then, in 2011 Director John Smarge created a sudden tropical storm with his International Assembly address.  Unfortunately corporate inbreeding, lack of common business sense, and a 2012 RI non-verbal action that telegraphed RI's priority throughout the Rotary network quelled the membership winds and the Good Ship remained in the doldrums.  But Director Smarge's tropical storm did stimulate some critical thinking by all aboard.
Finally, in 2015 favorable membership winds began to blow.  The Good Ship's sails ballooned, filling the crew and its leaders with energy and enthusiasm.  President Ravi established RI's first membership retention goal, and the Good Ship's officers established membership development as RI's operational priority.  In 2016, membership trade winds grew, and the Good Ship trimmed for smooth sailing.  President Germ eliminated interim membership deadlines, and the Council on Legislation, acting on the officers' recommendation, created a standing membership admiralty and charged them with keeping the Good Ship out of the doldrums.  All excellent signs, but the Good Ship can only navigate through the gauntlet of personal and corporate projects, programs, attributes and personal mindsets if RI continually communicates - in words and deeds - the importance of staying on course.  Otherwise, the Good Ship could find itself back in the doldrums.

Okay.  So much for the amateurish imagery.  In reality, it will take more than words on paper or in media for RI to continually create Rotarians. The lack of effective communication following the Board's 2003 decision vividly proves this, proof supported by RI's 2012 non-verbal this-is-our-priority action.  Rotary has designated August as Membership Month.  Nice archaic gesture, but it can be problematic.  Communicating RI's purpose and objective must be professionally, gently, and consistently communicated all year long, forever and a day.  Otherwise, RI and its member clubs will again find themselves struggling for members - and the dues they pay.
RI's only purpose is to create Rotarians and support them as they create and utilize RI attributes to advance the Object of Rotary.  RI's strategic plan must reflect this reality by establishing attainable visions regarding chartering and supporting clubs in their endeavors to create Rotarians simply because