As you read this, please remember that your organizations' existence depends on retaining and attracting supporters, be they dues-paying members, donors, customers, or clients.  As you continue reading, ask yourself if your business and/or club have fallen under the spell of one or more of these fantasies.  (These fantasies, according to the likes of Howard Schultz, Phillip Kotler, Jack and Suzy Welch, Sarah Sladek, John Kotter, Peter Drucker, Matt Ridley, Theodore Levitt, Sheri Jacobs, and Jared Diamond, are rampant in the histories of failing or failed organizations.)

One – By getting better at what they are doing, organizations believe their supporters will continue to demand their product or service.  Organizations, believing that they are the best at what they are doing, tend to become arrogant, lazy, and gravitate toward mediocrity.  These conditions will become their enemy because supporters will eventually find a way to achieve higher levels of value and satisfaction.  As the famed psychologist Abraham Maslow concluded, “Humans are needy, achievement oriented organisms.”

Two – It costs too much.  A fundamental principle of any successful marketing campaign is that if the product satisfies the supporters’ needs, they will find a way to pay for it.  Obviously there has to be a reasonable cost/value ratio, but cost is seldom the primary reason people do not buy what an organization markets.  Supporters are lost primarily because they do not believe they will receive, or are not receiving, value proportional to what they are being asked to contribute in time, treasure, and/or talent.  (Author’s note:  Between 1930 and 1950, Rotary membership more than tripled.  From 1995 through 2007, years of tremendous economic expansion and increases in personal wealth, North American Rotary club membership declined more than 10%.  The cost of Rotary is not the primary reason clubs lose members.)

Three – An increasingly affluent society will ensure the organization’s growth.  In this type society, organization’s leaders often assume that they do not have to be creative about what they deliver to the supporters.  Instead they tend to concentrate on improving what they are already doing.  What actually happens is that they get better at what they have been doing rather than improving the value of what they are doing to their supporters, which relates directly back to fantasies one and two.

Is one or more of these fantasies mesmerizing any organizations you are in, support, own, or are an officer or director?  If so, what, if anything, are you willing to do about it?  And if you don't know, why don't you?
Posted by Jim Henry at 12:01:00 PM No comments: 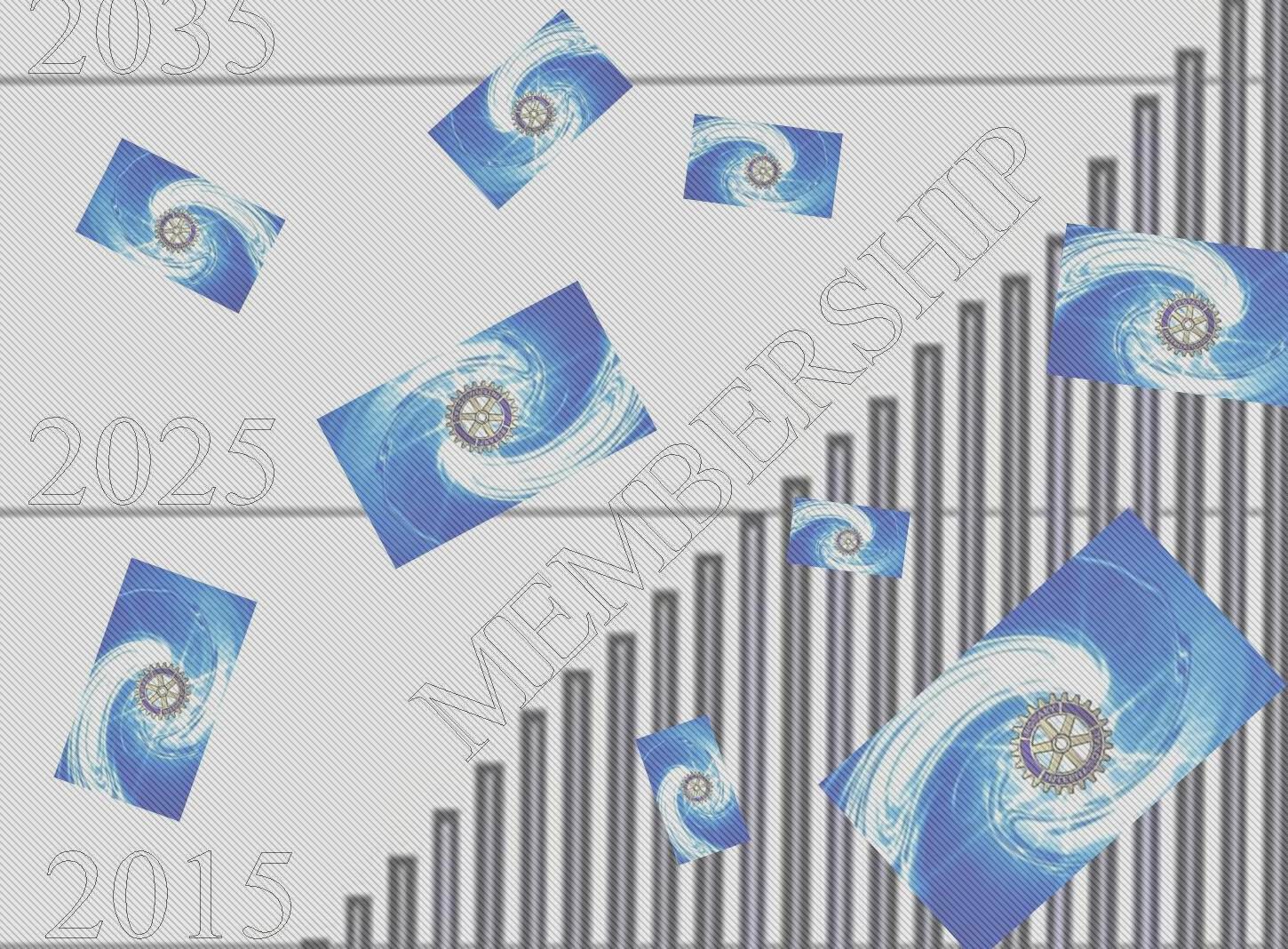 (Note:  In this 12-14-2015 revision, Rotary refers to Rotary International and The Rotary Foundation.)

Organizations, like empires, rise and fall; they go through stages of growth, maturity, and decay.  In the growth and mature stages, most organization leaders go through a phase where they believe growth will continue because the expanding and more affluent population will continue to demand the attributes that helped the organization grow.  This is a comforting fantasy that causes organization leaders to put more importance on attributes than on improving the value the attributes deliver to supporters and is one of the three major infections that cause organizational decay.
Rotary's membership doldrums is a symptom of the organizational stage Rotary is in - decay.  Leaders at all levels must dedicate themselves to the cure, and a cure is possible, but not without change in Rotary's culture.  Rotary leadership must imitate leaders of perpetually successful organizations - accept the prognosis and take corrective action.  They must understand that Rotary cannot recruit or sell itself out of decay.  To do so, they must look at present and future clubs and Rotarians points of view and find unique ways and means to deliver more value to them.  Delivering more value is distinctly possible because of Rotary's WHY factor.  However, too many leaders do not know Rotary's WHY factor or its value, and resort to promoting recruiting initiatives and selling attributes.  Neither will prevent continued decay because both originate from Rotary's point of view.  The only cure is through effective marketing.  There is no question that Rotary's differentiating WHY factor is a marketable brand, but too many leaders do not accept the prognosis nor are they experienced in marketing the cure.
The difference between selling and marketing, like the difference between recruiting and attracting, is more than linguistics.  Selling focuses on Rotary's needs; marketing focuses on present and future clubs' and members' needs.  Without long-term internal marketing continuity Rotary may find itself in the Organization Cemetery sometime this century.  As a forty-eight year Rotarian, that is saddening because Rotary has been wonderful to me and millions of present and former Rotarians, their families, and beneficiaries of Rotary's attributes.  But to market Rotary, leaders must believe in and understand its differentiating WHY factor, know the business Rotary is in, who its supporters (members, customers, donors, etc) are, and what it is that they value.

Transformational Open leadership is needed to put Rotary back into a sustainable growth stage.  Unless Rotary defines the result its wishes to achieve and makes achieving that result its perpetual number one priority, sustainable growth will continue to be a hallucination.
Posted by Jim Henry at 7:11:00 PM No comments:

Is your Rotary club making an impact in your community?  Whether your answer is yes or no, the impact your club is, or is not, making is probably having a similar impact on your club's membership.

When it comes to making an impact, is it really beneficial to all concerned to try to be beneficial to all concerned?  A huge mistake many clubs make is that they spread their resources over wide areas.  This is partly because clubs want to be fair to as many local causes as possible and to members by supporting pet causes. This does not differentiate Rotary clubs.  It weakens clubs' abilities to make greater impacts and often rips clubs apart.
Clubs will have the greatest impact on their community if they can start or change something that will, in itself, cause further changes - be the snowball that creates an avalanche.  Rotary International's Polio Eradication project is a wonderful example.  Two Rotarians, both doctors, with a grant from The Rotary Foundation, impacted their community by eliminating polio, creating an avalanche that evolved into Rotary International's worldwide effort to eliminate polio.  The Rotary club of created an avalanche when it helped Daddy Allen start a hospital for crippled children which evolved into the Ohio Crippled Children's Society then to Easter Seals.
The art is for clubs to search their communities and find areas where they can cause a tipping point like Philippine Rotarians and Daddy Allen did.  They had no idea they were creating avalanches.  They only wanted to make an impact in their community.  To make an impact takes vision, effort, practice, and experience to find a local cause that may create local change.  They exist in all communities, waiting to be discovered.

Without a doubt, clubs should not try to be all things to all people - be they beneficiaries or members.  If they do, they will lose out on opportunities to make greater, longer lasting impacts, and that impacts membership.
Posted by Jim Henry at 11:51:00 AM No comments:

Center on Purpose, not Image

Center on the club's purpose; its image will take care of itself!

Many clubs debate whether or not it is more important to be known as clubs that get things done by writing checks or by doing 'hands on' projects. The bailout solution to this dilemma is, of course, that clubs should have both.  But it's irresponsible to hide behind the bailout.  Doing so avoids addressing and solving the more critical issue - finding unique ways to achieve the club's only purpose.  More about that later.  But let me tell you a personal story that relates to this issue.
About a year ago, my wife and I decided to do a service project.  The beneficiaries were us.  We wanted to update our sixty-year-old house so we could enjoy it in our golden years and make it easier for us, and/or our kids, to sell.  We put on a new roof, resurfaced the pool deck, remodeled our entry way, updated our utility room, and the biggy - modernized our kitchen.  We just recently completed the project.  Does it really matter to us, as beneficiaries, if the service project was successful because we wrote checks or did it hands-on?  Of course not.
Creating Rotarians is the only purpose of Rotary International and its member clubs. Their only objective is to advance the Object of Rotary.  Does it really matter to beneficiaries whether individual Rotarians or clubs create Rotarians and advance the Object of Rotary by writing checks, doing hand-on projects, or combinations thereof?  Of course not.  But it does matter to a club's target audience, present and future Rotarians.  They are the ones who advance the Object of Rotary and should feel good about doing so.  It makes no difference whether they do it by writing checks or doing 'hands on' projects.  So, in plain language, clubs should center on offering unique services and opportunities that relate to and satisfy the wants and needs of their target audience, present and future Rotarians.  After all, the only accurate measure of clubs', districts', or zones' effectiveness is not how clubs and their members accomplish service projects; it is their ability to use appropriate attributes to create Rotarians from within their local social fabrics.

We accomplished our service project using both skills.
Posted by Jim Henry at 11:08:00 AM No comments: