Past Rotary International President Kalyan Banerjee Gets and Demonstrates How to Communicate It!

Past RI President Kalyan Banerjee gets and communicates that Rotarians are the spark plugs driving the Rotary engine.  In his February, 2017 letter accompanying Rotary's Annual Report, his opening sentence says, ". . . . I am in awe of the efforts made by Rotarians from around the globe to do good in the world every day."  This verbally and non-verbally speaks volumes to Rotarians and non-Rotarians.  Verbally, it shows respect by emphasizing Rotarians instead of referring to them as 'our members'.  To Rotarians and non-Rotarians, it identifies, appreciates, and gives definition to Who Rotarians Are. Non-verbally, most Rotarians will get a warm emotional buzz because they are being identified and recognized for Who They Are - exceptional people trying to make the world a better place.

With over 35,000 chartered autonomous Rotary clubs around the world united in advancing the Object of Rotary, it is easy to understand why Past RI President Kalyan is awed by how, individually and collectively, over 1.2 million

Why Join a Rotary Club? 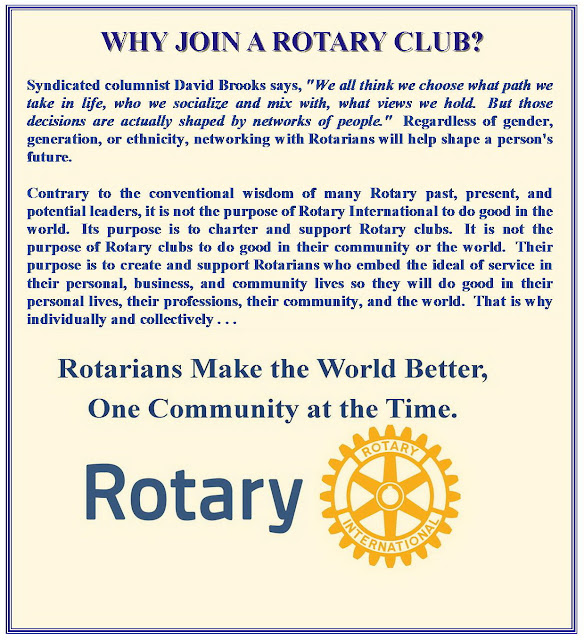 Innovation is a Key to Rotary International's Future 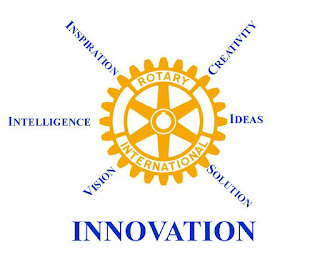 Creating Rotarians is the most important expression of the Object of Rotary, yet this detail is seldom discussed.  I wonder why, because if one critically analyzes successful organizations, it is obvious that they understand and deliver desired value to Them - supporters i.e. those who fund operations.  Supporters make it possible for Rotary clubs and Rotary International (RI) to thrive.  Both must continually be innovative.  Both must understand Rotary's value proposition and how it applies to Them in their realities.
For example, when IBM decided it wanted to change direction, its president said it needed to get back in touch with Them - its supporters (customers).  The top 50 executives had to visit five customers a week and deliver a write-up to the president. This eyeball-to-eyeball action gave IBM insight into its customers' realities which helped IBM find innovative ways to deliver an enhanced value proposition.  Apple broke out of the mature desktop computer industry by listening to people express the desire to take their computers with them.  Apple found innovative ways to deliver this value and ultimately became the world's largest mobile devices company.
On the other hand, Kodak, the company that invented cameras, including the digital camera, thought its business was producing and developing film because that is what generated most of its income.  What Kodak supporters were actually buying was the ability to preserve memories.  Not understanding why supporters were buying Kodak products resulted in it filing for bankruptcy.  RI, an association that grew in local Rotary clubs and membership because its objective was to help local business, professional, and community people improve their personal, business, and community lives, began thinking that its purpose was to be an association of charitable service organizations.  Membership began declining in mature major markets, a result of RI not understanding why its supporters joined and stayed in local Rotary clubs.  Many Rotary leaders have come to understand this reality, and that RI should be devoting more resources to delivering its original value proposition to clubs and Rotarians.

Advancing the Object of Rotary is the bedrock upon which RI's international network was founded and grew.  Many Rotary leaders have opened their minds to innovative ideas.  They should continue to do so with eyeball-to-eyeball conversations centering on the realities and needs of clubs and their members - Rotarians.  That is the only way RI will innovate new ways to deliver enhanced value propositions. Rotary clubs are not service organizations.  They are by definition civic welfare organizations. Rotary clubs create Rotarians who advance the Object of Rotary, beginning locally and spreading globally.  Charitable services are a result of Rotarians advancing the Object of Rotary. It begins with developing acquaintances - regardless of generations, genders, or ethnicities - and encouraging them become Rotarians.  Rotary's value proposition - The Object of Rotary - encourages Rotarians to better their personal, business, and community lives starting right where they live, work, and play.  And that is why . . .