The Rotary Network's Growth: Why it stopped! Will it Sustain? 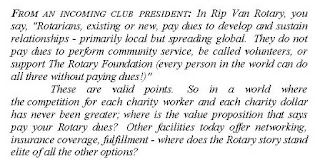 The recent Blog post, Is Rip Van Rotary Finally Waking Up? stimulated interesting comments from readers, some of which are included here.  As  they indicate, many club and district Rotarians and leaders wrestle with What is Rotary? and Why Rotary?, basically Rotary's value proposition.  So let's reconstruct how the Rotary network grew, why it stopped, and what it will take to continue revitalizing and sustaining its growth.

In 1905, Rotary's value proposition - The Object of Rotary - flowed freely from and naturally constructed the Rotary network much like the Mississippi River historically flowed freely and naturally constructed its delta.  In the latter part of the last century, Rotary International (RI) substantially restricted the proposition's natural flow by rerouting it.  This rerouting minimized constructing its network, particularly in major market areas, and it began to shrink.  In the last century, the Corp of Engineers substantially restricted the 's natural flow by rerouting it.  This rerouting minimized constructing its delta in , and it began to shrink.  Following Constructal Law, the reason was the same in both cases:  Rotary's value proposition and the stopped flowing free because both, with good intentions, were routed away from their natural course. The Corp of Engineers channeled the Mississippi River to serve the nation's needs instead of the delta; RI leaders channeled the Rotary network to serve beneficiaries'  needs instead of clubs and Rotarians.
RI's underlying problems created by this rerouting were: 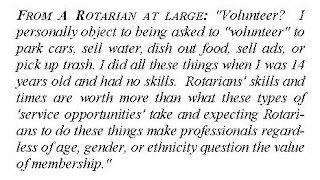 There are billions of volunteers and charity workers.  It doesn't take much skill to pick up trash, serve in food lines, dig ditches, or park cars.  Not only that, most have no interest whatsoever in joining a local Rotary club.  Even if they did, why should they pay dues to join an organization that recognizes them for doing what they are already doing?  Many Rotarians do volunteer to do charity work, but they must be differentiated from the billions of others.  Rotarians adopt the ideal of service in their personal, business, and community lives. Because they live by this ideal, they often identify local community needs, and as a result of the relationships developed through the network, create ways and means to satisfy those needs.  Most often it is writing checks funding those who have the necessary skills.  But is this the image of Rotarians emanating from RI, the networks headwaters?  Is this the image of Rotarians the communities in which they reside receive?  Is this the image of Rotarians those who may be interested developing acquaintances with them receive? 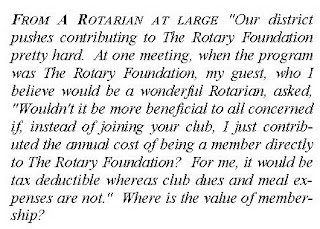 Only limited numbers of people in any community have the time and resources to join the Rotary network.  They are a niche group, and a minuscule niche at that.  People in this niche will expend the time and money to develop and sustain relationships just like lobbyists will contribute to political campaigns to develop and sustain relationships with politicians. Building relationships with this niche is the first and most important Object of Rotary.  The second Object respects how they utilize their professions to make their community better i.e. employ people, serve customers, satisfy community needs, influence positive community development, etc.  But it is in the third Object where Rotary's value proposition shines - Rotarians adopt the ideal of service in their personal, business, community, and world lives; the root of the Rotary network.
RI can reestablish its value proposition's natural flow by developing and executing a long-term internal marketing campaign centered on differentiating who Rotarians are, the value that people who may be interested in becoming a Rotarian receive, and telling stories about the benefits of advancing the Object of Rotary.  Hundreds of thousands of Rotarians, including many leaders, do not understand the Object's essence simply because few Rotarians stress its importance, particularly the value of developing relationships with like-minded people.  Often their defense is its century-old phraseology; the phraseology upon which the network was constructed.  The real reason is that Rotarians have not been encouraged to talk about its importance.

RI, through internal marketing, must destroy its restricting gates, and encourage its value proposition to once again flow freely.  This will constantly revitalize the networks most effective constructors, existing Rotarians.  Like unrestricted rivers perpetually build deltas, Rotarians will continue constructing their network because they know that 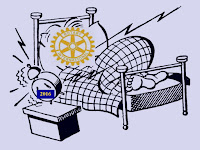 Rotary International (RI) General Secretary  recently announced that RI is on track to close out 2015-16 with the second highest membership ever.  This is super good news and should be the signal for RI to increase Marketing and Innovating momentum. President Ravi led the way by identifying RI for what it is - a business unlike any other.  This, and the changes made by the 2016 Council on Legislation, have laid the foundation for RI to have a bright future.  However, if anyone thinks such a future will automatically transpire, they are badly mistaken.  Changes, or strategic plans, written on paper do little good if they are not prioritized and successfully Internally Marketed.  (Example: Code of Policies 26.120. Passed and written in 2003, but never internally marketed.)  Marketing should aim for optimum, not maximum, membership. This requires extensive internal and little external (general public, worldwide) Marketing simply because retained Rotarians are RI's greatest asset, and its most effective sales force.
Innovation is where RI could differentiate itself from competitive organizations and make operational what its business should be.  It should take advantage of its momentum and be Innovative in Service, Social, and Managerial categories.  In Service Innovation, RI should set objectives that differentiate Rotary clubs and Rotarians from all other organizations.  Rotarians, existing or new, pay dues to develop and sustain relationships - primarily local but spreading global.  They do not pay dues to perform community service, be called volunteers, or support The Rotary Foundation (every person in the world can do all three without paying dues!)  In Social Innovations, RI should be Innovative in creating ways to better relate to its member clubs, and help clubs Innovate ways to relate to Rotarians.  In Managerial, RI should be Innovative in skills and activities needed to create and deliver services to clubs and Rotarians, including director, coordinator, and governor education and support.
RI does seem to be waking up.  Leaders are actually being Innovative and leading.

In Service Innovation, little has reached clubs and Rotarians, but

In Social Innovation:
In Managerial Innovation:
Innovation objectives have a problem in measuring their short- and long-term impact.  To do that, RI must look at itself from the outside - from the view of clubs and the social fabrics in which they exist.  This is where the universally applicable RG Index could play a vital role.

Exciting times lie ahead for RI providing transitional leadership remains in place, Innovation is encouraged, and both are adequately recognized and rewarded.  RI must better prepare and support its tiers of leaders so they can be more effective in strengthening weak clubs, starting new clubs, and helping all clubs advance the Object of Rotary in their local social fabrics because