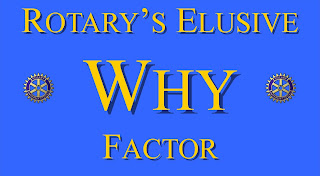 Rotary leaders, let’s be honest with ourselves.  What most local Rotary clubs do is not much different than what other similar organizations do.  Hundreds of organizations hold fundraising events and sponsor  various health, hunger, and/or humanitarian projects and programs. Many, in fact, do more impressive projects and programs than Rotary clubs.  So what clubs do is really not a point that would consistently differentiate most clubs from other similar local or international organizations.
But Rotary clubs continue to attract members.  If it is not what clubs do, is it how they do it?  What clubs do does not take any heavy equipment or sophisticated technology.  Everyone eats meals; billions pick up trash, handle shovels, use hammers, drive cars, serve in food lines, ride bicycles, swim, etc.  Millions of people donate funds to polio eradication and charitable organizations.  Virtually all organizations similar to Rotary have charitable foundations that support what they do.  Even more are charitable organizations that anyone can support without joining a local club or chapter.  So the differentiation can’t be how clubs do what they do.
If clubs are not differentiated by what they do or how they do it, then why do people continue to join Rotary clubs?  Probably because of Rotary’s WHY factor.  Well, what is Rotary’s Why factor?  Perhaps the best way to define it is by example, and there is none better than Rotary International’s polio eradication campaign.
A bit of history – between the end of World War II and the mid-1980s, the World Health Organization, after spending billions of $US trying to rid the world of polio, claimed virtually no success.  Yet, in the mid-1980s, Rotary leaders, because of Rotary’s WHY factor, undertook the challenge believing that it could be done.  No small undertaking because Rotarians are independent business, professional, and community leaders of different ethnicities, religious orders, genders, economic systems, generations, and political structures.  Yet this diverse group undertook this enormous endeavor because they believed they could make their family, village, town, city, and country safer by eliminating this dreaded disease.  These Rotarians used their resources and leadership skills to influence local and national tribal, religious, and political leaders to commit to freeing their children from this scourge.  For twenty-eight years, millions of Rotarians have banded together and, even after ridding their own countries of polio, expended personal time, resources, and influence to sustain the cause.  Why did they do this?  They did not do it to perform the hands-on service of putting a few drops of liquid on a child’s tongue – almost anybody can do that.  They did it to make the world a better place to live by eliminating polio.  Not just anybody can do that.  That’s Rotary’s WHY factor – Who Rotarians Are – Leaders who get things done; Leaders who impact their communities, leaders who advance the Object of Rotary.

It is Rotarians, not Rotary, who make the world better. . . One community at the time. People are drawn to Rotary because of this - its WHY factor.  Solving internal problems of why those drawn are not staying may be a more formidable challenge than eliminating polio.
Posted by Jim Henry at 7:02:00 PM