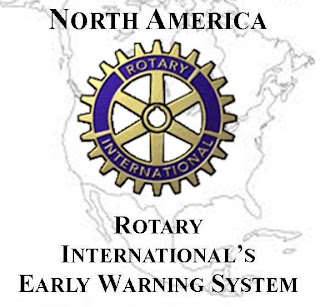 For almost twenty years, Rotary in  has undergone a dramatic drop in membership.  At the 2010 Regional Rotary International Membership Coordinator (RRIMC) Assembly, word came out that some Rotary International (RI) Directors had said that membership was primarily a North American Problem.  Zone 33 and 34 RRIMC's Bevin Wall and Jim Henry posted a Rotatorial on this matter indicating that North America was a projection of RI's future unless it addressed some basic issues.
Past RI Director , in his 2011 presentation before the International Assembly, highlighted one of the basic issues when he announced that between the years 2003 - 2010, Rotary clubs throughout the world inducted 1.1 million members while membership held steady at approximately 1.2 million members.  Many Rotary leaders, unaware that RI had suffered a net loss of 1.1 million members - 157,000 per year - gasped.
During this time period, records show that North American clubs had a gross loss of approximately 43,000 members.  Accurate records do not exist regarding regional net losses, but, using the numbers from Director Smarge's presentation, let's take a trip down and assume that North American clubs inducted 300,000 members. This would mean that 's net loss was 343,000.  What regions lost the other 757,000?  Because of poor membership management, the only thing we know is that RI lost 1.1 million members - half of its customers - in a seven-year period.  What would the directors of any thriving company say to management when given this information?  What does the RI Director representing your club say about RI's membership management?
Let's be honest with ourselves.  Membership, particularly retention, is a worldwide issue.  A reputable worldwide firm hired by RI concluded over a year ago that RI is in the same position now that Kodak, a once mighty worldwide photographic giant that recently filed for bankruptcy, found itself in 1997 and did little to alter its future (Graphics 47-52 of the document available at this link.)

is warning RI of its future.  The Rotary world, from bottom to top, must cease addressing symptoms and refocus from being top-down What: service-centric supported by members to being bottom-up Who: member-centric impacting local communities and the world.
Posted by Jim Henry at 11:05:00 AM