In 2008 I became Zone 34’s Membership Coordinator.  It wasn’t long before I visioned Rotary International (RI) as Sisyphus struggling up the membership development slope pushing a network of 34,000 clubs weighted down by decades of outmoded, and sometimes misguided, practices and attitudes, especially in legacy regions.
But now, thanks to a few People of Action leading the way, RI’s business model is changing. RI appears to realize that greater value will be created if its worldwide, community-centered autonomous Rotary clubs are released from recent customs to pursue Rotary’s common purpose and objective – the Object of Rotary – centered locally and spreading globally.  Successful organizations, businesses, consultants, and Wall Street experts say such a move is wise because RI is transitioning its visions and strategies from the outmoded hierarchies and practices of the Industrial and Information eras into the “modern” Social Era.
Throughout the Rotary network, influential Rotarians are skeptical, which may be one reason changes in attitudes and practices on membership-related support, public relations, and other business practices for our member-driven organization is slow coming to districts and clubs.   Rotary history indicates that they should not be skeptical because Rotary pioneered the Social Era in 1905.  Back then, Rotarians talked to people face to face i.e. developed acquaintances.  Traveling first by horseback, wagons, trains and ships, they grew the network from one Rotary club in Chicago into a worldwide organization simply because they were spreading a common value .
Near the end of the twentieth century, RI left its differentiating Social Era brand behind and began trying to brand itself as a worldwide service/charity organization.  It didn’t work.  But that’s history.  RI’s present and future leaders cannot be weighed down by past hierarchies, customs, and practices, but the lessons learned should never again be forgotten.  RI leaders at all levels should clearly understand: 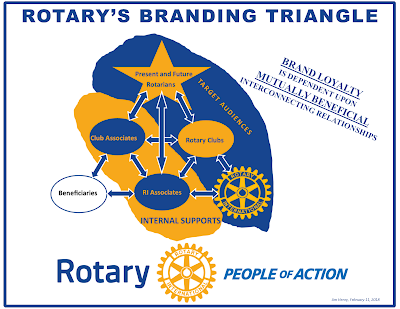 Most of those now leading Rotary understand these business fundamentals.  They should plan for RI to gain club and Rotarian insights by staying interconnected, and to expeditiously act with relevance.  Present Rotary leaders should free the association’s over 35,000 autonomous Rotary clubs from past and present impositions set or implied by RI, its zones, districts, and/or The Rotary Foundation.  RI should center all activities on chartering and supporting clubs as they strive to retain and attract People of Action to advance the Object of Rotary.

RI is, and always will be, Rotary’s center of influence, but its influence must be respected and mutually beneficial to clubs and Rotarians if it wants to spread and receive value through interconnected relationships.